Roberto Martinez immediately promised Bill Kenwright a return to Champions League football, but is he capable of delivering on his promise? To add to the debate we have sought the view of our guest columnist, Alan Harrison, a Wigan Athletic supporter but also a follower of the Blues. 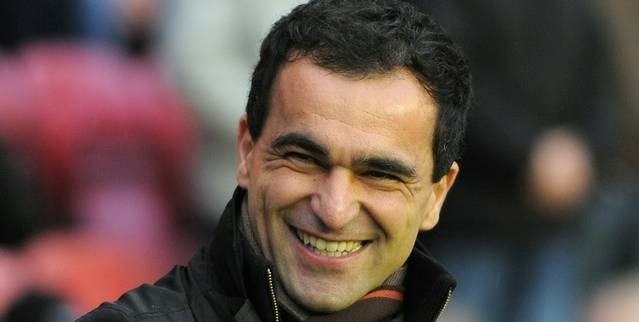 First a bit of background about me…

The first ever football match I went to was on Boxing Day 1967 when my dad took me to Goodison Park to watch Everton v Burnley. We sat in the seats above the Gwladys Street end and Everton ran out 2-0 winners that day (Joe Royle and Alan Ball were the scorers). Being at the game left a great impression on me! During my teenage years, I often went to Everton games (both home and away), while my local club were still in the divisions outside of the Football League – so you could say that if I had a second team after Wigan it would be Everton.

So, onto the subject in hand, Roberto Martinez, now manager of Everton – and my thoughts and views on him, his time at Wigan and how well I think he will do at Everton.

Martinez came to Wigan in the summer of 2009, and I think it is safe to say it was a decision that pleased the vast majority of fans. He had become, in his time as Swansea manger, known for encouraging his team to play football in the right way. Wigan had just finished the previous Premier League season in a very respectable 11th position under Steve Bruce, but his style of play was rather direct, getting the ball forward as quickly as possible. We all hoped under Martinez that we would continue this progress and consolidate ourselves as a good Premier League side. I think all Wigan fans also understood that Martinez had certain targets to hit when he became our boss – the chief of which was to drastically reduce the wage bill, whilst still trying to keep us in the Premier League. He also made some promises when he came about his aims for Wigan – one of which was to bring European football to the club. This he has certainly achieved, but I think his aim was to do this by making us a top-ten Premier League side rather than via winning the FA Cup and relegation!

During his time here at Wigan, I have watched the club grow in stature (in footballing terms). He introduced his “total football” playing style to the club, but his reign didn’t start too well, as he changed the ethos of how we played our football. We took some severe drubbings that season (9-1 and 8-0, come to mind), but did beat the likes of Arsenal! We finished the season 16th, which took us backwards in terms of our league position, but we could all see that the team was playing much nicer football. Pass statistics and possession statistics were up on the previous season under Steve Bruce – but we looked fragile and liable to concede goals. This continued in his second season in charge! We still could see the improvement in the style of play, but again we were asking why our defensive frailties had not been sorted when they were so obvious to see. We still preferred the football that we were now playing, but couldn’t understand why these frailties had not seemed to be addressed. In his first season you could argue that he was still trying to deal with a squad he inherited from Steve Bruce, while introducing a new style of play to the club. But now in his second season, with a lot more of his “own” squad – we seemed to be in far more trouble than the previous season! It was perhaps at this point that fans opinions started to divide over whether he was the right man for the club or not. If you look at some of the Wigan forums you will see “light-side” and “dark-side” fans – Martinez believers or otherwise!

Season three was memorable only for the end to our campaign. Written off by pundits as having no chance of survival in February, we then went on a run of games that saw us beat the likes of Liverpool, Arsenal and Manchester United (and hammer Newcastle United by half-time) and look so composed under tremendous pressure! At the end of that season I certainly felt we had turned the corner and that the side was now maturing under Martinez’s guidance. I was certainly looking forward to the 2012-13 season because it seemed to hold so much promise for us and that Roberto was going to fulfil his ideals and turn us into a top-half Premier league side. We thought that we were seeing some real progression, but this was short-lived as we reverted back to type in our last season in the Premier League and the inconsistencies came straight back into the team – and that has been a frustration for a lot of fans in all of Roberto’s time with us. What we don’t understand is how we can have a side finish in the way it did in the 2011-2012 season and then become (after a summer break) the same old inconsistent side, giving away stupid goals and throwing away point after point. You may argue that there were mitigating circumstances, in that we didn’t seem to be able to field the same defensive line-up from one week to the next. However, no-one appeared to be working on our defensive capabilities and that seemed a worry. It’s one thing playing nice, attractive football but you have to ensure that you do not concede too many stupid goals – but Martinez never seemed to address this in his time here.

But even though we were relegated, we got plaudits from the pundits for the way we tried to play our football, and of course the high-point of the season was the magnificent victory against Manchester City to in the FA Cup. Your chairman says that his exposé on how we beat Manchester City was what sold him on Martinez – and I have to say we did play really well and deservedly won the cup. But if he could get us to perform like that in a cup final, why could he not get us to consistently perform like that in the league?

So after four years here at Wigan what have we learned about Roberto Martinez? Well he has certainly improved the playing style of the team, and he has instilled his “total football” ethos throughout the club (from junior teams right the way through to the senior side). He has worked on a rather small budget (compared to many other Premier League clubs) and has found some players of real quality. I am sure that Everton fans will agree (bearing in mind this season’s FA Cup quarter final and final performances) that when the team “had their heads on the game” his style of football certainly worked! However, in his time here he has never seemed to sort out how the team should be defensively. We’ll soon find out if this was just down to poor players, since Everton have a respectable back line. If they start conceding (or leaking) goals, then perhaps it could be seen as a flaw in the “total football” strategy. Also, when things weren’t going quite right, I personally think Martinez was at times far too slow to react and change things. We were saying at half time in some matches to take this player or that player off, but Martinez instead waited until games were already over, and then left players waiting on the touchline for 5 minutes before introducing them.

But to summarise all this, I believe that you have a very promising and talented manager in charge now at Everton. He is not yet proven at the top levels of the Premier League, but I suppose that could be said of David Moyes when he first joined you. He certainly comes with a ringing endorsement from our chairman, Dave Whelan, who has always spoken highly of him and is certain that he is destined for one of the top clubs in Europe at some stage in the future! Can he turn Everton into that club? I honestly do not know, because it seems that most clubs outside the current top five do not have the financial muscle to join the big boys. I think that his style of football is excellent, but sometimes seems to be too slow in tempo, with more concentration on keeping hold of the ball than trying to hurt the opposition. Perhaps it was the standard of player that he had at Wigan? But since a lot of the current Premier League clubs seem to be looking at taking players from us there must be some quality there! Who knows! But, give him time – he may turn out to be a very good acquisition for you. Everton have a history of playing football “the right way” going right back to the time of Harry Catterick (manager at my first Everton game), and Martinez will definitely continue that tradition. But can he get you to the Champions League (as he has been quoted), I don’t know but I would like to hope he can!

View all posts by Alan

One thought on “The jury is out on Martinez, but he has the potential to be the greatest”