If your memory stretches long enough, there was a time in the mid 1980’s when Everton were the Kings of England. We continue our look back at the most glorious of Everton generations, remembering the day the title returned to Goodison in 1985, as Howard Kendall’s fantastic team were crowned the Champions. 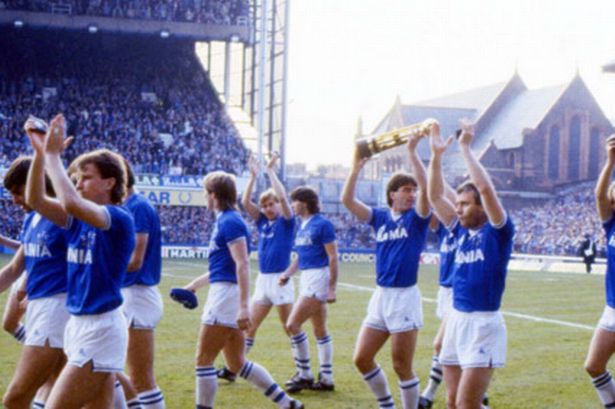 As the 1984-85 season drew to a close, Everton were chasing an unprecedented treble consisting of the League Championship, the FA Cup and the European Cup Winners Cup. Everton had already secured places in the final of the two cup competitions and on the back of a 7 match winning streak in the league, knew a win against QPR would secure the title for the first time in 15 years. We have included an extract of the match report that appeared in the Liverpool Daily Post the day after the title was secured. In addition, we have the post-match reaction from the Liverpool Echo, who brilliant conveyed the emotion inside Goodison.

At St Domingo’s we love to include a video or two and we have two brilliant clips. The first video includes match highlights from the 2-0 win over QPR, the second shows the post-match celebrations. For those who were there, it will bring you out in Goosebumps. The 6th May 1985, a quite brilliant day which will live long in the memory.

The force-fed diet of broken promises is thankfully at an end and the legions who have suffered in silence as the Red enemy from across the park swept all before them, at last have something to crow about.

Actually, the word “something” is both inappropriate and insufficient. Everton supporters young and old, far and distant, now have a team they can be proud of. The side Howard built is a cracker.

There was a time, five or six weeks ago, when I honestly though the thoroughbreds who inhabit White Hart Lane were preparing to sneak the title in a dramatic end-of-season smash and grab raid. Rather stupidly I had forgotten one simple and undeniable fact – Everton don’t lose any more. Where we mere mortals have blood oozing through our veins, Kendall’s young lionhearts seemingly have neat adrenalin.

Yesterday’s game was never going to be an easy one. QPR may have unwittingly gate crashed the year’s biggest private party, but they certainly weren’t going to lie down and surrender, as the script decreed.

For in a bone-crunching encounter at Loftus Road back in December, tempers and composure were occasionally lost as boots, fists and knees sought refuge in the fleshy parts of the opposition bodies.

Aware that their boss had already made it perfectly clear that there would be no final whistle celebrations unless victory was attained, Everton were uncharacteristically nervous for the most part.

The breath-taking football, which has helped turn boys into men, was rarely in evidence as they tentatively rolled forward in search of a goal which would inevitably release much of the pressure.

After numerous near misses, it duly arrived midway through the half as a direct result of one of 10 pre-interval corners. Kevin Sheedy’s kick was helped into the path of Gray by a Rangers defender; the spring-heeled Scotsman directed it towards Pat Van Den Hauwe and there was Derek Mountfield to latch on to his defensive colleague’s header to thrash the ball home via the crossbar and Peter Hucker’s legs.

Gary Bannister so very nearly spoiled the afternoon with just 17 minutes left when he headed firmly against the foot of a post, then with the seconds ticking away Graeme Sharp neatly tucked away his 30th goal of the campaign to officially launch the jamboree.

An unforgettable afternoon as the title comes back, Liverpool Echo May 7 1985

There was hardly a dry eye in the place, as Everton brought the league championship back to Goodison Park after 15 years.

Sir John Moores, millionaire chairman when they last won the title in 1970, could hardly contain his joy, as he said: “I never thought that I’d live to see another league championship come to Goodison. It’s great to feel free of the domination of Liverpool.”

The sight of a delirious fan tying a scarf round Sir John’s neck summed up the heady atmosphere, shared by everyone present.

So did the scenes on the pitch, when referee John Hough blew for time at 4:40pm to signal that the Blues were the kings of English soccer.

Manager Howard Kendall could not resist dancing a little victory jig on the pitch, and the players ran to hug him with joy. The jubilant fans sang: “There’s only one Howard Kendall,” and the chants of “Champions” rang from all corners of the packed stadium, when the players started the traditional lap of honour.

One thought on “When Everton were Champions”