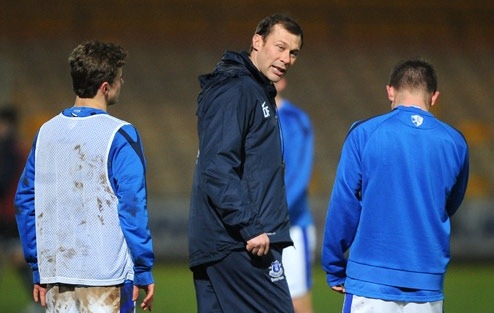 We all now know that Bill Kenwright interviewed Alan Stubbs, David Weir and Phil Neville in relation to the managers position, but in truth non of them were ever serious contenders for the role. Kenwright almost admitted as much in a recent interview, indicating that he felt duty bound to consider internal options, even if there were better suited options outside of the club.

Everton have a history of employing from within. Catterick, Kendall and Royle, Everton’s trophy winning managers had all representing the Toffees with great distinction during their playing careers. However, when Ferguson, Stubbs, Weir and Neville were linked with the job this time around, not many were ecstatic about the possibility of seeing one of the Blue heroes in charge of the club.

The Evertonian community were almost united in their wish to see all four of these Blues overlooked in favour of either one of Martinez or Pereira. This was not because of a dislike for the coaches in question, all who have served Everton fabulously well during their playing careers, it was because unfortunately on this occasion all four were seriously under qualified for the role. Consider Duncan Ferguson, adored by many, but with just over a years coaching experience with Everton’s under 18 side, he was not ready to step into the Goodison hot seat.

The news over the weekend that David Weir is now favourite for the Sheffield United role is fantastic news. Weir will be missed as part of Martinez’ back room team, his playing experience and knowledge of the game has been a great benefit to Alan Stubbs and Everton’s u21 side, who went so close to securing the inaugural u21 Premier League Championship last season. But if he has ambitions of managing in the Premier League and ultimately in charge of the Blues, Weir will need to gain experience in the lower leagues of English football. In other words, he needs to serve his apprenticeship away from the Blues. The same applies to Stubbs, Ferguson and Neville.

It would appear that Phil Neville is to take an alternative approach. Offered a coaching role at Old Trafford, Neville is expected to join David Moyes at the home of the current Champions. He will likely combine that role with his current position as Stuart Pearce’s number two with the England u21 team. He will gain great experience, but will one day look to build his credentials away from the Premier League.

So where does that leave Everton and Martinez. The new Everton manager has already indicated a wish to mix the remaining back room team with his trusted colleagues from Wigan. Stubbs is likely to remain at Everton in the short term, and I would be surprised if he does not take on a more active role with the first team. Steve Round and Chris Woods are already United bound, so replacements will need to be found, probably in the shape of current Wigan Assistant Manager – Graham Jones and Goalkeeping Coach – Inaki Bergara.

On this occasion Kenwright was perfectly correct to overlook the Everton candidates. We are all wishing for a long and successful period under Martinez, but when the time comes to appoint another Everton manager, I hope that all the favourites for the role can boast a long and lasting relationship with the Toffees.