Everton continue on their travels with a second away game of the week, as they seek to increase the pressure on their rivals for the much coveted European places. The Blues arrive in Sunderland knowing that nothing but three points is good enough, and will hope that their fantastic record against the Black Cats continues for at least another season. 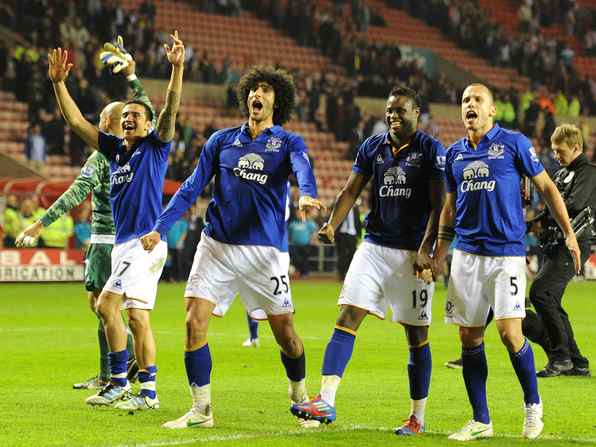 Speaking before the midweek match at Arsenal, David Moyes gave Everton a 15% chance of qualifying for next seasons Champions League. The midweek results did little to increase that percentage and the Blues are left knowing anything less than 5 wins from 5 is likely to result in disappointment.  The odds are therefore heavily stacked against Everton, but David Moyes and his team will not wave the white flag until it is mathematically impossible to finish in a European place. A win at the Stadium of Light would give all Evertonians hope, especially with two difficult, but winnable home games left (Fulham and West Ham), sandwiching a Merseyside derby at Anfield, before a final day trip to Stamford Bridge.

Everton have an incredible record against Sunderland, with no defeats in their last 19 meetings against the Mackems. Indeed, David Moyes, in his time as Everton manager, has never ended up on the losing side against Sunderland. The record at the Stadium of Light is equally impressive, with 5 wins out of the last 9, although the last three league visits have ended all square.

The opening half an hour of this fixture will be particularly important, with Everton likely to face an early storm, as Sunderland host their first home fixture since the appointment of new manager Paulo Di Canio. Sunderland do remain in the midst of a relegation battle, but the three points picked up in last weekends win over Newcastle will have lifted spirits considerably. This is a difficult fixture for the Blues and David Moyes will need to take a positive approach if Everton are to bring the three points back to Merseyside.

In regards team selection, David Moyes will keep his cards close to his chest, Leon Osman remains doubtful, after hobbling off in last weekends fixture against QPR and subsequently missing the trip to the Emirates in midweek. If Osman misses out, Moyes is expected to name an unchanged lineup, with Victor Anichebe given another chance to impress, despite struggling to impose himself on the Arsenal defence. 19-year-old Ross Barkley turned in a stellar performance against the Gunners and if retained in the team, will take up his position just behind the lone striker.