Everton travel to White Hart Lane on Sunday for a crunch game in the chase for Champions League Football. 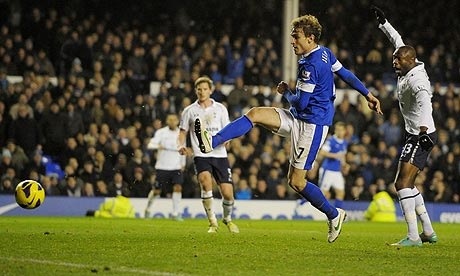 The Blues currently sit 3 places and 6 points behind the Londoners, but with a game in hand to come later in the month, a win on Sunday would propel Everton right back into the mix for a top 4 finish.

Everton will again be without the influential midfield duo of Fellaini and Pienaar, but will be buoyed by the injury news at White Hart Lane. Player of the Year favourite Gareth Bale, is likely to miss out after injuring his ankle in Spurs’ midweek Europa League tie with FC Basel, and he is likely to be joined on the sidelines by lightning quick winger Aaron Lennon.

David Moyes is faced with a difficult decision over which formation to select. The 3-5-2 formation implemented for the 1st time against Stoke brought dividends, but I would be surprised if Moyes adopted the same team again at Spurs. A return to a 4-4-2 line up would see Heitinga drop to the bench, with Neville, Oviedo or Barkley likely to come in to the midfield.

Nikica Jelavic will be keen to push his claims for a starting spot and will have fond memories of playing Spurs, having scored in each of the last two meetings between the teams, both of which resulted in Everton victory. These two games however, have taken place at Goodison Park and it is 4 years since the Blues last won at White Hart Lane.

Our archive footage this week looks back to the Championship winning year in 1985. Everton and Spurs were both pushing for the title and met at White Hart Lane in March. Andy Gray and Trevor Steven put the Blues 2-0 up before Spurs pulled one back through Graham Roberts. In the dying moments a wonder save from Neville Southall maintained Everton’s lead and ensured victory.