Back in 1985 Everton were the greatest team in the world. Champions of England and winners of the European Cup Winners Cup, Everton had the footballing world at their feet. 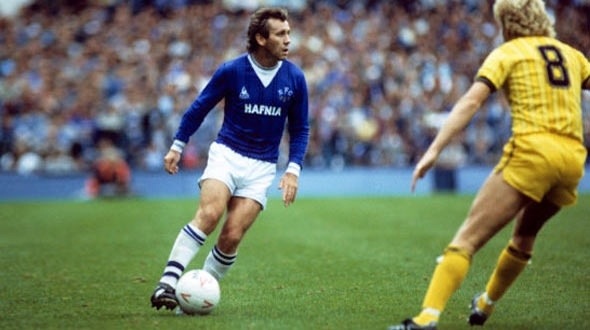 Everton legend, Peter Reid has been reflecting on that glorious period in an interview for Sky Sports. In 85, Reid was voted as the PFA player of the year and was also considered one of the best in the world.

“It was obviously a successful year for Everton. Neville Southall won the Football Writers’ award, I won the PFA one, we were champions, we won the European Cup Winners’ Cup. It was an incredible season for Everton and a really good one for me personally.”

The former England international also finished fourth in the World Soccer Player of Year award but finds that achievement more difficult to come to terms with, even now.

He laughs: “I think I came in behind Michel Platini, Preben Elkjaer and Diego Maradona. There must have been some bad players about if I’ve come fourth in that.”

Unfortunately we all know what came next and due to the Hysel disaster, English clubs were banned from competing in European competition. No where was that punishment felt harder than at Goodison Park. The glorious team of Southall, Stevens, Van Den Hauwe, Ratcliffe, Mountfield, Reid, Bracewell, Steven, Sheedy, Sharp, Heath and Gray began to break up as players left in search of European football.

“I don’t want to be controversial, but Howard Kendall left to go to Bilbao and obviously English clubs were banned from Europe and that was a big blow to Everton as a football club,” he said.

“When Howard left it was an exodus of the players, which was disappointing for all of us.”

Asked if Everton could have been a dominant force in Europe had the ban not been in place, Reid added: “You can never tell, but it was a good side.

“I did mention the Bayern Munich game – they were one of the top sides in Europe and we managed to knock them out.

“Liverpool had won a couple of European Cups in the 1980s and they were a fantastic side at the time, and I think Everton would have been a top side in Europe as well.”

You can enjoy the full article at SkySports.com