Stop everything right now, Four Four Two have spoken and Everton are going to finish 4th!!! 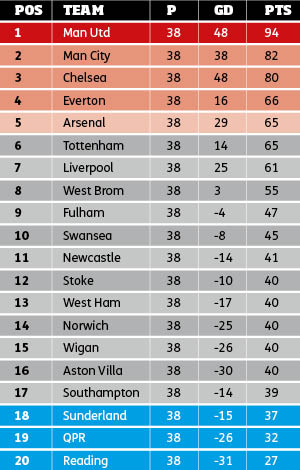 Not Tottenham, nor Arsenal, but Everton will win the battle for the coveted 4th spot and a place in next season’s Champions League. It is not going to be easy mind you, and we are in for a nail bitter on the final day of the season, with Everton just one point above Arsenal going into the last set of fixtures.

If Four Four Two have got things right, the final day of the season promises to be as dramatic as last year, with the final outcome still unknown as the 4th official displays how much added time will be played. Everton are to lose at Chelsea, but much to the relief of the travelling Evertonians, Arsenal will also lose at relegation threatened Newcastle to ensure we are making trips to the Bernabeu and the Nou Camp next season.

Bring on Messi and Ronaldo, because we are going on a European Tour!

But the real drama is for fourth. In the dying minutes Arsenal are trailing 2-1 at St James’ Park and know that with Everton losing at Chelsea, they could snatch fourth if they can just equalise. Players are thrown forward in a very un-Wenger-like manner until they win a corner in the 93rd minute. Szczesny goes up… but it’s headed clear and Newcastle run up the other end to score.

It’s all over. Everton have qualified for the Champions League; Arsenal have missed out for the first time under Arsene Wenger. Sunderland have been relegated, along with QPR and Reading.

Read the full article at fourfourtwo.com