For me, there is no finer place in the world. The magic of walking up the steps from the underbelly of the stand and out to view Goodison in all its glory. The bright blue seats, the fantastic architecture of the Archibold Leitch designed Bullens Road and the brilliant and unique Main stand, on the Goodison Road side of the ground, which towers above the pitch, and for those brave enough, provides a fantastic view of the game from the Top Balcony. 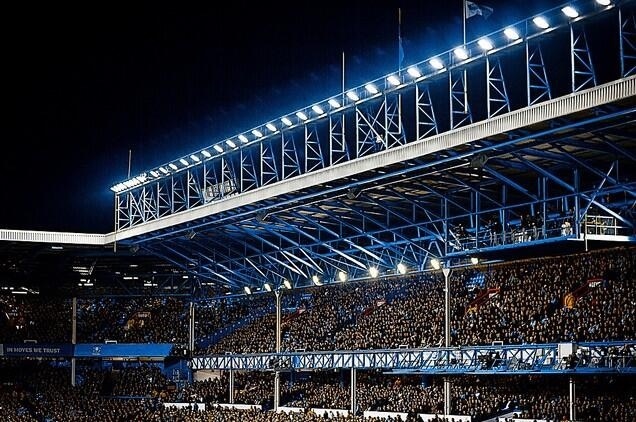 For all its critics, and as time goes by, that number has steadily grown, Goodison remains one of the most instantly recognisable football grounds in the UK. Supporters of this great club all have their favoured place to watch the game, whether it be from the Gwladys Street, the Park End or elsewhere, Goodison Park is a real football ground, with history etched into every corner.

Current owner, Bill Kenwright often waxes lyrical about his early memories of the ground, stood in the ‘Boys Pen’, a caged section of the ground at the back of the Gwladys Street, located near to the corner with the Bullens Road stand, watching the great players of the 1960’s. My first memories of Goodison are from the early 1980’s. At that time, as was common across all grounds in England, Goodison had a number of terraced areas, with fencing erected at the front of each stand, and crush barriers scattered around. Taken to the game by my Uncle, I stood on the small terrace at the front of the Main Stand (now known as the family enclosure). We would arrive at the ground a good hour or so before kick off, to secure a decent vantage point, and I was often perched on one of the blue crush barriers, about 10 yards away from the legendary Howard Kendall.

Within a couple of years of my first Goodison experience, Everton entered into one of the Golden eras of our rich history. Big matches became the norm, and although football attendances were nowhere near the level they are today, primarily because football had developed a bad reputation after years of violence at games, Goodison was often full to capacity when those big games came around.

I also remember with great detail, my first memory of Goodison under the floodlights. Due to the design of football grounds in the 80’s, most didn’t have lights across the roof of the stands as they do today. Floodlight pylons were common place, but Goodison, due to it’s ‘modern’ design had a row of lights across the top of the Bullens Road and the Main stand. I was fortunate to go to Goodison from the age of 5, but despite years of pestering, my parents had refused to let me attend a night game until September 1986. Now aged 7, I made the journey to Goodison full of excitement. I had watched the Bayern Munich game on TV 18 months earlier and was excited to experience the same atmosphere. It wasn’t quite the same, but even with a crowd of just 26,018 and Oxford United the visitors, I still enjoyed the night, with Everton victorious with goals from Trevor Steven, Alan Harper and Kevin Langley.

Please use the comments section or our Twitter page to let us know your memories and why you love Goodison.