The Executioners Bong is at times brilliant, offering an innovative approach to covering the fortunes of Everton. Indeed, I enjoy it so much, it is identified elsewhere on this blog as one of my favourite Everton sites. However with the recent article about Fellaini, the Bong has got it wrong. 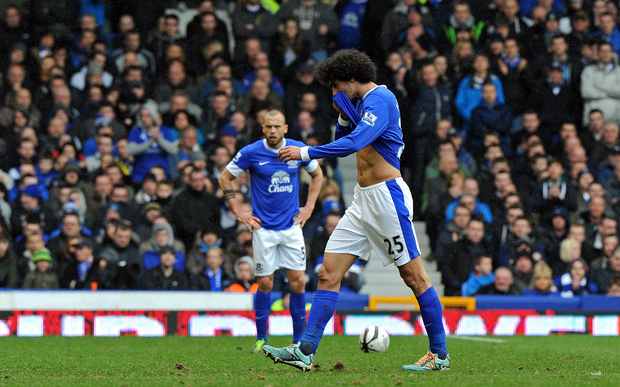 How can he claim that Fellaini has failed to influence a number of Everton games, when the big Belgium has at times dominated teams and won the Blues all 3 points with his brilliance.

The Executioner claims that his article is not a knee jerk reaction, however the article stinks of hypocrisy and contradictions. He has fallen in to the trap on sensationalism and totally ignored the fact that aside from Leighton Baines, Fellaini has consistently been our best player for the last 24 months. Lets look at the article and respond with factual evidence.

Do you remember the Fellaini that dominated midfield against Arsenal or Chelsea? Me neither.

Why are we looking at games against two teams in decline. Neither Arsenal or Chelsea could be considered as the best in England. In contrast, Fellaini has dominated fixtures against United, both last season at Old Trafford and this year at Goodison, and against Manchester City at Goodison in 2011 and at Eastlands this season. 8 points collected. And if we really want to talk Arsenal, Fellaini bullied the Arsenal midfield at Goodison this season, not only scoring, but also prompting Mikel Arteta to hail the positive influence Fellaini had on his previous teams performance in earning a point.

His overall impact on the side has been over-hyped, particularly this season.

12 goals and in 5 games he was the Blues only goalscorer. How do you define impact? Dragging a team from mid to lower in the league to contention for a European games!!!

I could go on and tackle some of the more opinion based comments within the piece.

The booing vs Wigan was partly down to him turning his back on the play and his usual wayward passing but also a signal of the growing resentment many fans feel towards him for this continued lack of commitment and positioning for a move away from the club.

Now it is not my style to name and shame, however there were others on the pitch on Saturday showing an equally bad attitude, failing to chase back when possession was lost and he certainly wasn’t the only player guilty of wayward passing. I am not going to excuse Fellaini’s reaction, what the big Belgium is guilty of, is displaying his feeling loud and clear and for all to see, but to question his commitment to a team, he has served with distinction for 4 plus years, in as insult to his professionalism and to David Moyes, who continues to see Fellaini as one of his premier players.

The answer to this question is simple, it’s no. Chelsea would bring Fellaini into a midfield, already full of talented footballers and play around him. Using the Belgium’s strengths and looking for him to get forward at every opportunity to cause havoc in the box. And occasionally, most teams would welcome the opportunity to go direct when faced with potential defeat. Everton’s crime is that we have too quickly looked to play long towards Fellaini, when a more measured and mixed approach to the game would no doubt suit Fellaini and Everton far better.

I for one hope that Fellaini is still at Everton next season. The Bong got in wrong, and left me a disappointed follower.