Everton eased through to the Quarter Finals of the FA Cup with a 3-1 win over League One opponents, Oldham Athletic. 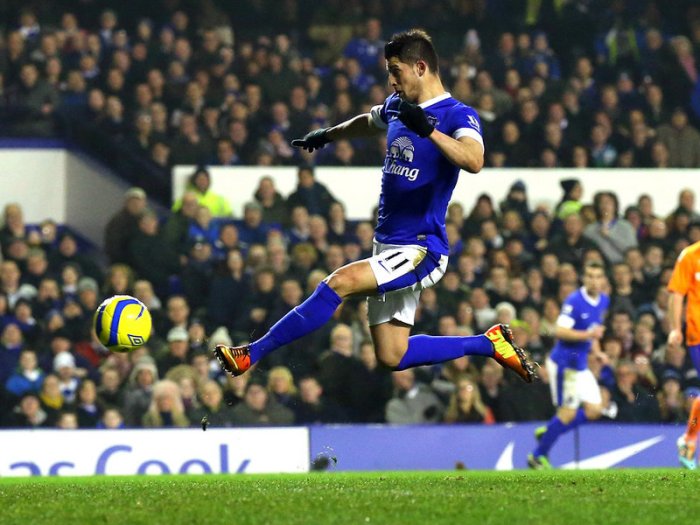 On a night, potentially fraught with danger, Everton produced a professional display to see off Oldham at the second attempt. The warning signs were there for all to see prior to kick off. Oldham had already beaten Nottingham Forest and Liverpool to reach the 5th round stage, and had given the Blues a run for their money in the original tie at Boundary Park. David Moyes and his team however were not to be outdone by the Latics, producing a solid, if unspectacular performance to ensure safe passage.

All this came, despite the Toffees missing the influential Marouane Fellaini through injury, the Belgium struggling from a nasty gash to his knee suffered in the weekend match against Norwich. In truth, this did encourage Everton to play the ball more often, with the option to look for the big Belgium  removed, the Blues looked to play with more guile, often looking to set Mirallas and Jelavic free with clever through balls. Although Mirallas ended his goal drought, with a deserved opener, Nikica Jelavic still looked well short of top form. The Croatian, looked determined to make an impact on the match, but his lack of confidence was telling, either taking shots too early, or looking to do too much to create the ideal opportunity. If Everton are to enjoy cup success in May, they will need their star striker to re-find his goalscoring touch, but to use a cliche, class is permanent, form is temporary, and the Goodison faithful will soon be singing Jelavic’s name again.

Everton’s other goals on the night came from a Leighton Baines penalty kick, which the Oldham keeper was unlucky to see squirm under his body and a fortunate header from Leon Osman, which the keeper this time made a real hash of dealing with.

Worryingly for the Blues, they again failed to keep a clean sheet. Lucky to see a shot from the returning Jose Baxter strike the post, the defence were eventually caught out by a near post corner deep into the second half. Matt Smith is a danger from set peices, but he had acres of space to ghost in and plant his header firmly past Tim Howard. Phil Neville led the inquest after the goal, but in truth it was hard to point the blame as a number of Everton players, employing the zonal marking system, failed to track the run or deal with the ball into the box.

Plenty of work remains, but on Saturday week the cup run continues, as Wigan Athletic arrive at Goodison for the lunchtime kick off. 90 minutes from Wembley, it really is time to dream.

The highlights from the match are included below thanks to FA TV.