I had two guests with me for the Villa game at the weekend, experiencing Goodison in all its glory for the first time. 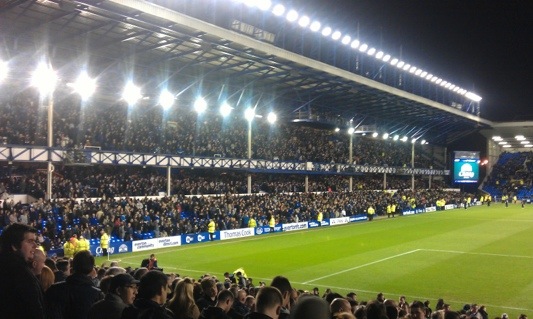 The pair, both supporters of Nottingham Forest are chasing attendance at all 92 league grounds in England and Wales and are currently three quarters of the way through their quest. They were pretty determined to embrace the day and asked me to show them the full experience. After securing 2 additional tickets alongside me in the lower Gwladys, I was genuinely excited. Not since I introduced my son to Everton for the first time had I had accompanied first timers to Goodison, he was simply blown away by the experience, but with the experience of hundreds of games up and down the country would they be to?

As we initially turned the corner on to Gwladys Street I sensed they were underwhelmed by their first sighting of Goodison. I was certainly disappointed by their first reaction. We all know that Goodison is not the most beautiful place from the outside, but I faintly remember my first time, making the same journey, tracing almost the exact same steps and been in awe of the place. Granted, I was just 5 years old and it was my first experience of live football, but I struggled to hide my frustration over their initial reaction.

Over a couple of pints outside the Spellow, I tried to explain. I was trying too hard, I was talking passionately about the club, but they weren’t buying it. They were more interested in “Comedy Dave”, formally of the Chris Moyles show, who was stood 10 yards away, trying to enjoy a quite pint, but forced to pose for a number of pictures with fellow drinkers. This wasn’t quite what I had in mind, but I told myself not to worry, the day will take care of itself, they will be impressed once inside.

And they certainly were, first impressions are important, but it was the view inside the ground that took their breath away. Looking across at the Main Stand I could tell they were impressed. Whatever your opinion of Goodison, the club work incredibly hard to ensure it looks it’s best from inside the ground and they were loving it. A real football ground, enjoyed by real football fans. Prior to the game, I had run through the boards motives for moving away from Goodison (I am firmly in the stay at Goodison camp), lack of executive boxes, restricted views, etc… and after an initial scan they soon realized the current restrictions placed on the club. But the ground was filling nicely and as Z-Cars burst over the speakers they were set for the Everton experience.

I am sure you all know the score by now, a frantic three-three draw, with a last gasp equalizer and opportunities for Everton to claim what had looked for most of the day an unlikely victory. Certainly a great game for the neutral and one they enjoyed for the entire 90 minutes.

Walking away from the ground they were buzzing from their experience. Despite some terrible defending from both teams, they had been amazed by the quality on show. This is way beyond anything they are experiencing week in week out at the City Ground. They were also appreciating the high expectation levels. Heitinga enjoyed a miserable afternoon, but they were staggered by how quickly the crowd had got on his back. They expect a lot here, Nil Satis Nisi Optimum and all that. The atmosphere had surprised them. Quite at first, almost a stunned silence, by what was happening out on the pitch, but then electric, as the crowd attempted to whip up a storm as Everton came flying back into the game. They were disappointed, Everton had failed to grab a winner. They were looking forward to the Goodison bedlam they have regularly witnessed on TV, but alas on this occasion, it was not to be. As we went our separate ways, I reflected on an enjoyable day. I was frustrated Everton had failed to win, but I was proud of our great club and taken aback by how all encompassing this club can become after just one visit. I am fairly sure they will be back.