In the last 12 months David Moyes has pulled together the third incarnation of his Everton, transforming a team that was beginning to show signs of decline into a genuine Premier League force capable of challenging the upper echelons of English football. 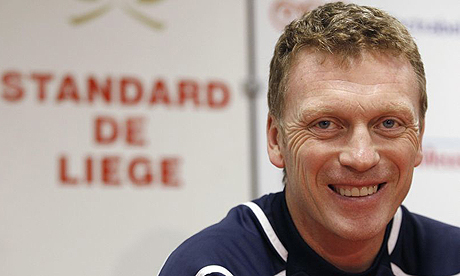 Yesterday we looked back at the first team Moyes could call his own. During his first 4 years in post, the Scot put together an Everton team that peaked with a 4th placed finish in the Premier League and a crack at the Champions League the following the season. Today we look at the team that developed out of Champions League heartbreak. With his team exiting at the qualifying stages, Moyes decided to refresh his squad in search of the glory days, ultimately he was unsuccessful, but at present this team epitomises the Moyes reign more than any other.

On the back of the 4th placed finish and with the prospect of qualifying for the group stages of the Champions League, David Moyes was given funds by the board to invest in his playing squad. A number of the new arrivals failed to impress and either found themselves out of favour, or quickly sold to minimise loses. Per Kroldrup a centre half with a huge reputation came and went, as did Simon Davies who was signed from Spurs but sold to Fulham within 18 months. Andy van der Meyde signed from Inter, but fell into the dark side of life on Merseyside and never found a settled starting spot. Not all the signings were bad however. Mikel Arteta completed a move from Spain after his successful loan spell and was quickly adored by the Evertonians. Probably the most gifted player to play under Moyes, Arteta took the club to his heart and dazzled with his ability on the ball. Phil Neville arrived from Manchester United for £3.5 million as Moyes looked to introduce winners into his team. Neville was destined to captain the club and a testament to his time at the club is very few refer back to his Manchester United days now. And finally, Nuno Valente arrived from FC Porto. A Champions League winner himself, Nuno was incredibly popular, although in the twilight of this career, the Portuguese is remembered fondly by the majority of Evertonians.

The team was starting to take shape, especially during the following summer when Tim Howard arrived from United, Joleon Lescott from Wolves and Andy Johnson from Crystal Palace as Moyes again broke the clubs transfer record to sign the England striker.

Tim Howard would establish himself in the Everton goal on the back of Nigel Martyn’s retirement and with over 300 appearances for Everton is rightly seen alongside Martyn as one of only two genuine successors to the great Neville Southall.

The defence had developed, Yobo became a mainstay of the side and played alongside Lescott or Stubbs, until Phil Jagielka arrived from Sheffield United. At right back Everton remained functional, with Tony Hibbert and Phil Neville sharing appearances. On the left hand side, Valente and often Lescott provided options, but all that changed when Moyes signed Leighton Baines from Wigan Athletic. Baines transformed the way Everton played, with his rampaging runs down the left hand side and brilliant link up play with the midfield. 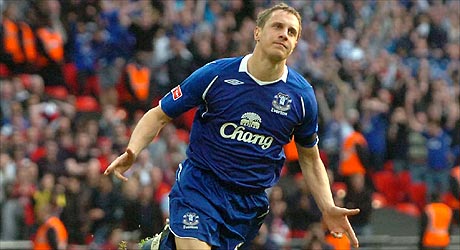 The midfield had a relatively settled look, although Moyes continued to search for the missing ingredient. Steven Pienaar arrived from Borussia Dortmand and Marouane Fellaini from Standard Liege to form a regular five with Tim Cahill, Leon Osman and Mikel Arteta.

The reason Everton never kicked onto the next level probably lies with the Centre Forward. Everton have searched for a number of years to find a 15 to 20 goal a season man and although another record signing, Yakubu filled that void for 18 months, a terrible injury suffered away at Spurs halted his progress. Andy Johnson and James Beattie came and went, as did youngster James Vaughan, an academy graduate who suffered with a succession of injuries. Victor Anichebe flattered to deceive, never fulfilling his potential during this spell. Louis Saha certainly had the most talent and on arrival from Manchester United he provided Everton with a spearhead, which very nearly took them to FA Cup glory.

This Everton team enjoyed a number of memorable nights, especially in Europe. Evertonians have always craved European football and more than any other English team took to the Uefa Cup/Europa League. Everton and David Moyes always took the competition seriously and everyone enjoyed memorable trips to Kharkiv, Nuremburg, Florence and Lisbon and the nights under the floodlights at Goodison. Everton will look back at the 2007-8 season as a missed opportunity, with Fiorentina knocking Everton out on penalty kicks after the Toffees had beaten eventual winners Zenit St Petersburg in the group stages.

The hunger for silverware was strong, Everton achieved back to back 5th placed finishes, but the desire for trophies was strong. Moyes’ Everton almost reached Wembley in 2008, only to be denied by a Joe Cole winner for Chelsea in the Carling Cup semi final. The following year, Everton went one step further in the FA Cup, defeating Manchester United on penalties at Wembley in the semi final, before again losing out to Chelsea, this time in the final. Saha had put Everton into a first minute lead, but goals from Drogba and Lampard condemned Everton to defeat.

On the back of that Wembley upset, the team began to break up. Joleon Lescott followed the dollar all the way to Manchester to join City. Yobo fell out with Moyes over international commitments. Arteta became tired of Everton’s lack of progress and moved to London to play for Arsenal. Pienaar also left in search of Champions League football, joining Tottenham Hotspur. Up front the Blues continued to struggle and with Saha suffering with injury and Tim Cahill drying up in front of goal, Everton were slowly been dragged back into the also rans.