Everton were forced to settle for a single point after a disappointing first half performance left them with too much work to do in the second period. 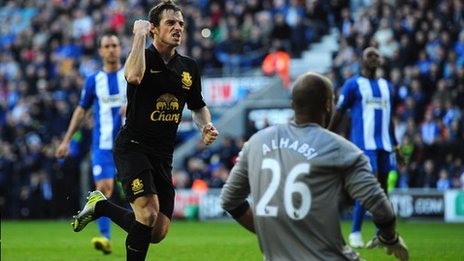 A late Leighton Baines penalty secured Everton a draw at the DW Stadium, but despite not playing to their full potential Everton left Wigan feeling hard done to by another team of under performing officials.

With only 10 minutes gone Everton fell behind to a headed finish by Kone, disappointingly the linesman was the only person inside the ground who failed to pick up the fact that the Ivorian was stood in an offside position. Everton’s response was instantaneous, straight from the kick off a misplaced Pienaar shot fell perfectly for Jelavic to head home his 4th goal of the season.

This should have acted as a wake up call for the Toffees, however more poor defending let in Kone down the right and he pulled the ball back from the touchline for De Santo to put Wigan 2-1 up. If Everton had the officials to blame for the first goal they could only blame themselves for letting the Lancastrians back in front. 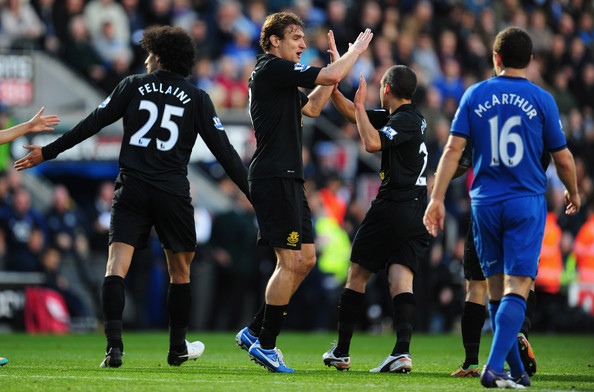 The second half was a one way affair, with Moyes dropping Fellaini into the centre of midfield and moving Mirallas behind the impressive Jelavic, Everton began to dominate. A number of chances went begging with the Wigan keeper denying Everton on more than one occasion. The man should have levelled up when Jelavic was fouled by a Wigan defender as he prepared to fire the ball at goal. A certain penalty kick but some how missed by referee Mr Friend. The anger of the travelling Evertonians increased further when Jelavic was denied a penalty kick for a second time. This time a ball into the Wigan box was expertly controlled by the Croation, only for Caldwell to barge him in the back.

The pressure on both the Wigan goal and referee Friend was intense now. With only minutes remaining, a good Everton move led to Mirallas taking the ball in the box before instantly having his feet removed by Steven Caldwell. This time the ref did point to the spot and Baines did the rest firing high into the top corner of the Wigan net.