Everton produced another outstanding performance to bounce back from midweek cup disappointment in style. 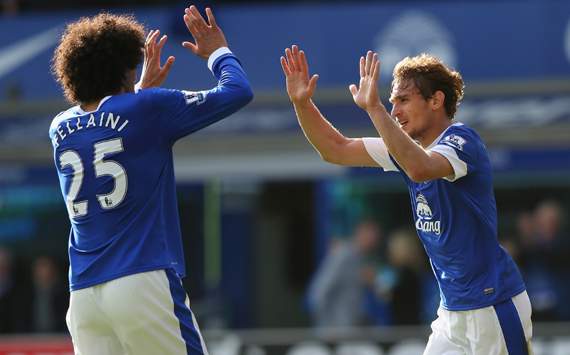 All those gathered inside Goodison feared the worst after a difficult opening 15 minutes, with Everton clearly suffering a hangover from the midweek cup exit, the Blues went behind after only 5 minutes. Poor defending and goalkeeping gifted Southampton the lead, with Gaston Ramires heading home unmarked from a corner. It almost got worse for the Blues, but Jay Rodriguez fired wide when clean through on Tim Howard’s goal.

From that moment on the tide turned. This Everton team is made of special stuff and panic is not a word spoken at Goodison anymore. The Toffee’s began to pass the ball, and the movement of Mirallas, Pienaar and Jelavic was too much for Southampton. Fellaini and Osman were again outstanding in midfield and Baines and Coleman terrorized the Saints full backs.

It was Leon Osman who pulled Everton level, firing into the top corner after good work from Mirallas on the right. Everton were unstoppable now and Mirallas was again the chief creator, playing a neat one two with Fellaini before releasing Jelavic who fired passed the Southampton keeper to put Everton 2:1 up. It was 3, minutes later, Coleman danced inside 3 Southampton defenders before floating a wonderful cross to the back post for Jelavic to head home from a tight angle. It could easily have been 5 or 6 by half time as Fellaini hit the bar and Everton pushed forward at every opportunity.

The second half was a much tighter affair. Southampton were far more resiliant but it didn’t stop Everton testing the keeper from distance on a number of opportunities. The breakthrough which may have led a glut of goals never arrived and the Goodison faithful were left to make do with a low-key second 45 minutes.

With results going Everton’s way the Blues now sit 2nd in the table and dreams of Champions League football continue to gather momentum.