After a very impressive performance at full back from Seamus Coleman, in last night’s 5-0 victory over Leyton Orient, many will be asking, is now the time right for Seamus to be trusted with the right back position? 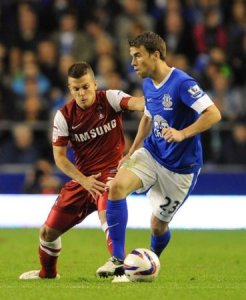 Seamus Coleman burst onto the scene at Everton over 2 seasons ago with a number of impressive performances on the right hand side of midfield. His energy, exuberance and determination to get forward made him a real fans favorite. Over the last 12 months his career has stalled somewhat as Premier League managers have learned to combat his style of play and David Moyes has preferred natural midfield players to the young Irishman. In fairness to Coleman he was signed as a right back, but a lack of awareness and concentration has led Moyes to remain loyal to Hibbert and Neville at right back.

His performance on Wednesday has certainly left Moyes with food for thought. All be it against League One Orient, Coleman demonstrated many of the attributes that have made Leighton Baines such a success on the opposite flank. At right back, Coleman would provide Everton with terrific balance, offering a genuine attacking threat from the right for the first time in the Moyes era. It is certainly decision time for Moyes!